Flooding remains a threat Tuesday in parts of the eastern United States, while the death toll continues to grow in the Caribbean as a result of Hurricane Matthew.

Haiti, the country hardest hit, observed the last of its three official days of mourning Tuesday. Official death tolls there have varied widely, from around 400 to over 1,000. Many areas of the country remained difficult to reach.

In the U.S., the death toll by late Monday stood at 23. Hundreds of thousands remain without power, and the situation could worsen as rivers continue to crest.

Consider the Possibility That Trump Is Right About China

In North Carolina, helicopters and rescue boats carried people to safety after a levy was breached near the town of Lumberton, according to Governor Pat McCrory. 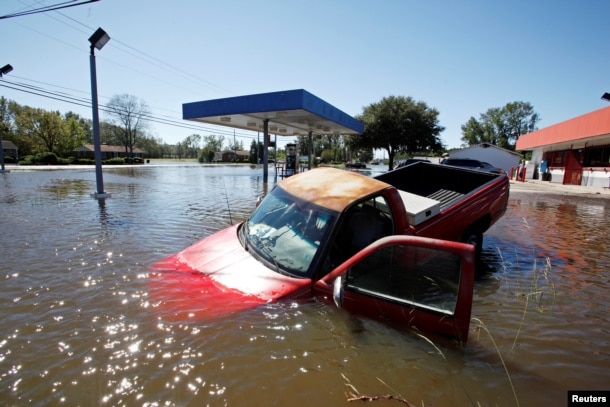 “We have reports that nearly 1,500 residents in Lumberton are stranded right now. Most of the water is about knee deep, but we do have people on the roofs as we speak,” McCrory told a Monday news conference.

Dozens of river and stream gauges were still showing flood stage across the Carolinas and Virginia, and five locations in North Carolina were at all-time record highs, according to the National Weather Service.

Matthew, which has left the Atlantic coast and has largely dissipated, was the most powerful storm to hit the United States coast in nearly a decade, and one of the longest-lasting major hurricanes on record.

One preliminary analysis puts damage estimates in the U.S. in the billions of dollars.

But the destruction was on another level in Haiti, where thousands of homes were flattened, crops were destroyed, and critical infrastructure was left in tatters.

On U.N. official surveying the vast destruction, ruined crops and casualties in Haiti described the scene as looking as if a nuclear bomb had gone off.

Paul Hasse, national director for the humanitarian agency World Vision in Port-au-Prince, told VOA that virtually nothing in Haiti’s southwest was spared.

“The island in the middle on the western side took a really hard blow,” he said. “Fifty percent of the houses are destroyed there. And the northwest as well, it’s not getting a lot of attention, but we’re hearing from our partners who worked there that it’s extremely hard hit.” 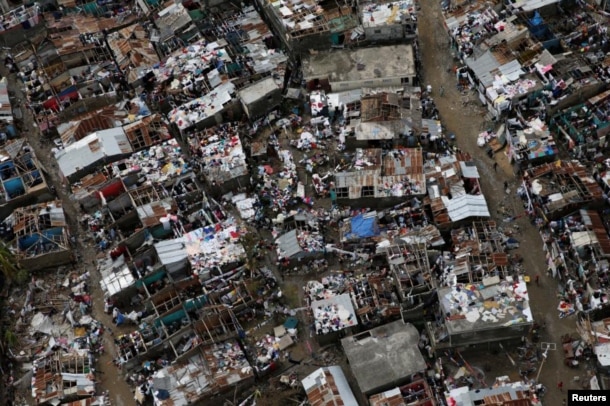 The immediate concern is keeping people alive and treating cholera cases, Hasse said. But that will eventually give way to longer-term problems, such as how to restore crops and rebuild homes.

The United Nations on Monday appealed for $119 million to bring life-saving assistance to Haiti.

“Hurricane Matthew has resulted in the largest humanitarian crisis in Haiti since the 2010 earthquake, at a time when the country is already facing an increase in the number of cholera cases, and severe food insecurity and malnutrition,” the U.N. appeal said.

Haiti says 1.5 million people have been affected by the hurricane and 350,000 are in need of immediate assistance, as most are homeless.

The U.S. military has been delivering food and medicine to Haiti by air and sea, as well as heavy-lift helicopters, bulldozers, water-delivery vehicles and mobile operating rooms. UNICEF says the conditions in Haiti are “perfect breeding grounds for waterborne diseases.”

Marc Vincent, UNICEF’s representative in Haiti, said, “Every day that goes by increases the threat of cholera.”

The catastrophic damage was made worse because the impoverished country is still recovering from a devastating earthquake in 2010. Thousands of people who have been living in flimsy shelters since the earthquake saw those washed away by the hurricane, which also destroyed a bridge that is the only link between a large portion of southern Haiti and the rest of the country.

Officials have warned that the list of casualties will likely climb, perhaps significantly, as rescuers manage to reach remote villages.

Video images from Haiti showed entire landscapes of metal shanties that lost their roofs in the winds and driving rains, along with downed trees and fields of mud from overflowing rivers.

The International Red Cross has also issued an emergency appeal for $6.9 billion in relief aid for Haiti, the poorest country in the Western Hemisphere.

Get Help to Secure Election, US Urges Local Officials

Dozens of people are missing in Oregon alone, with one emergency official saying the state should be preparing for...