WikiLeaks on Saturday released full transcripts of three speeches Hillary Clinton gave to Goldman Sachs executives in 2013, along with comments by her presidential campaign staffers about how to handle challenging issues.

Wikileaks has been releasing material hacked from the email account of her campaign manager, John Podesta, for the past week.

According to the emails, her staffers noted potential problems, including her statement to bank executives that “political reasons” factored into passing a law on bank reforms, and Clinton’s flattering her audience by saying people in the banking industry know regulation issues better than anyone else.

Clinton has been dogged by accusations from her rival for the Democratic presidential nomination, Senator Bernie Sanders of Vermont, and other critics that she is too close to Wall Street and other members of the financial elite.

Another email contained suggestions about how she could align herself more favorably with the working class by spending a day working alongside hotel maids or child-care workers. A key Clinton ally, former Michigan Governor Jennifer Granholm, suggested the idea to a Clinton aide, saying, “Our base [key Democratic supporters] would go wild for it.” 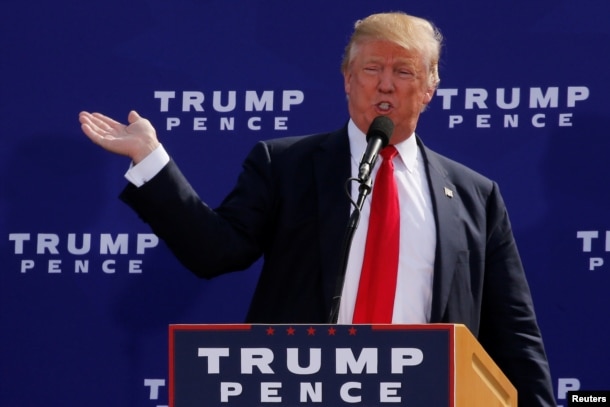 Republican presidential nominee Donald Trump denies recent sexual assault allegations, saying that if he ever touched a woman in the audience they would slap him, as he holds a rally at a car dealership in Portsmouth, New Hampshire, Oct. 15, 2016.

Meanwhile, Republican candidate Donald Trump suggested Saturday that Clinton might have been on drugs at the last debate and that both candidates should undergo drug testing before Wednesday’s final match.

“We’re like athletes, right?” Trump said to his audience at a rally in Portsmouth, New Hampshire. “I’m willing to do it.”

Trump also accused the media of influencing the November 8 presidential election in favor of Clinton, as he continued to deny multiple allegations of sexual misconduct.

“They are phony allegations with no witnesses whatsoever,” Trump said at the New Hampshire rally. “It’s a rigged election because they’re taking these unsubstantiated [news accounts], no witnesses, putting them on the front pages of newspapers.”

Hillary Clinton should have been prosecuted and should be in jail. Instead she is running for president in what looks like a rigged election

Earlier Saturday, Trump tweeted, “Hillary Clinton should have been prosecuted and should be in jail. Instead she is running for president in what looks like a rigged election.”

Trump has said repeatedly that Clinton should be jailed for her use of a private email server while she was secretary of state. After an investigation, FBI Director James Comey announced in July that charges against Clinton were not appropriate.

Trump’s latest comments came one day after two more women alleged that the real estate mogul made unwanted sexual advances toward them.

A contestant on Trump’s television show, “The Apprentice,” told reporters Friday that the businessman kissed and grabbed her at a hotel where she had gone to discuss potential jobs. Summer Zervos was a contestant on the show in 2006. Summer Zervos, foreground left, alongside her attorney, addresses the media during a news conference in Los Angeles, Oct. 14, 2016. Zervos, a former contestant on “The Apprentice” says Republican presidential candidate Donald Trump made unwanted sexual advances toward her in 2007.

In an article published Friday by The Washington Post, Kristin Anderson said Trump slid his fingers under her skirt and touched her genitals through her underwear in a New York nightclub in the early 1990s.

The 46-year-old resident of Southern California said she pushed his hand away and got up from the couch on which she was sitting. Anderson said she and her companions were “very grossed out” by the incident, which she said lasted less than 30 seconds.

Anderson said she was reluctant to tell her story publicly, but was convinced she should do so after The New York Times, The Palm Beach Post in Florida andPeople Magazine published accounts earlier this week of women who said they had been groped by Trump.

Clinton was spending the weekend in New York preparing for the October 19 debate, but her campaign is launching an initiative to capitalize on Trump’s unpopularity among some women voters. 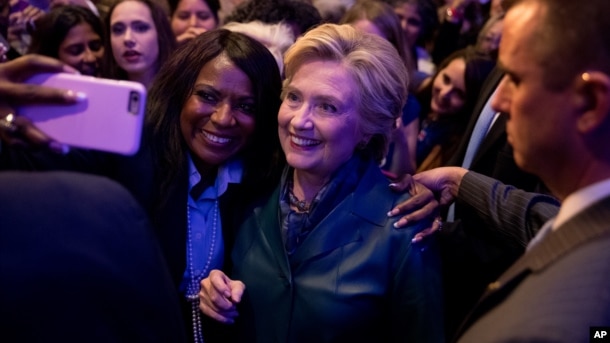 Democratic presidential candidate Hillary Clinton takes a photograph with a member of the audience after speaking at a Women for Hillary fundraiser at the Hyatt Regency in Washington, Oct. 5, 2016. Clinton’s campaign is now actively mobilizing women.

“Our campaign is mobilizing women disgusted by Trump to organize their communities and get out the vote for Clinton, either during early voting or on Election Day,” Clinton campaign aide Mini Timmaraju said in in a statement.

The candidates have about three weeks to make appeals to the nation’s voters, some of whom are apparently feeling the stress of the intense presidential campaign.

In this homestretch of the presidential race, Clinton has extended her lead over Trump in national polls. The RealClearPolitics national average shows Clinton leading Trump by nearly 7 percentage points (48.1 to 41.4) in a two-way race.

US Destroyer Again Targeted by Missiles Off Coast of Yemen

A mobile fingerprinting app U.S. immigration agents use to run remote ID checks in the field has become a...