US Military: IS Turning Mosul Into ‘Hell on Earth’

US Military: IS Turning Mosul Into ‘Hell on Earth’

Islamic State fighters trying to hold on to the terror group’s shrinking, self-declared caliphate appear to be ready to turn their Iraqi capital into a fiery inferno rather than relinquish it to Iraqi forces.

U.S. military officials say IS militants are trying to build up an already intricate network of defenses in preparation for the looming battle for Mosul, though many of the moves smack of desperation.

How to Keep U.S-Chinese Tensions from Sparking a War

The plans, Dorrian said, appear to include digging trenches around the city, to be filled with oil and set afire as Iraqi forces move in.

U.S. and Iraqi military officials say the progress of Iraqi forces in the areas around Mosul also have uncovered other “significant signs” indicating that IS is weakening.

Just months ago, IS was thought to have had as many as 10,000 fighters in and around Mosul. More recent estimates, though, reduce that number by half. 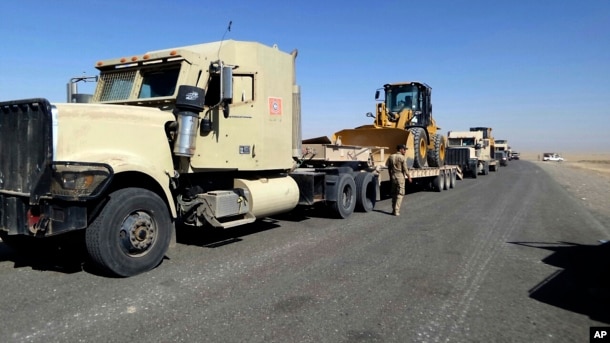 FILE – Iraqi security forces are seen amassing hardware in the city of Shirqat near Mosul, Iraq, Sept. 20, 2016, as part of operations to retake Mosul from IS militants.

Some Iraqi officials believe evacuations account for some of the militants’ decline. They say senior IS leaders and many foreign fighters have been fleeing Mosul for Raqqa, the group’s stronghold in Syria.

U.S. and Western intelligence officials worry that IS fighters will try to melt into the background and hide among civilian populations in Mosul, and that the foreign militants fighting alongside them might resort to black-market smuggling networks – the same groups that helped get them into Syria and Iraq – to help get them out.

Still, U.S. military officials anticipate that, regardless of the number of IS fighters that remain in Mosul, those who are holed up in the city will fight to the death.

Pentagon officials have long said any effort to retake Mosul would require at least eight to 12 Iraqi brigades of about 3,000 soldiers each, along with a couple of Kurdish Peshmerga brigades and additional police units to help secure the city.

The eight to 12 Iraqi brigades are “ready to go,” Colonel Dorrian said Friday, adding that they could be joined by Popular Mobilization Units (PMUs), another name for Iraq’s Shia militias – some of which have been accused of targeting Sunnis during the campaign to reclaim the city of Fallujah. FILE – A fighter of the Islamic State group holds an IS flag and a weapon on a street in the city of Mosul, Iraq, June 23, 2014.

“The Iraqis are going to continue to develop their plan,” Dorrian said. “They’re coming up with a plan that is politically acceptable to those who will participate and those who will be affected.”

United Nations officials have warned that more than 1 million people could be uprooted from Mosul once the offensive to liberate the city from IS begins, perhaps as early as October.

As of the end of August, the U.N. refugee agency said, about 213,000 people had fled Mosul for different parts of Iraq.

IS losses in Afghanistan

The U.S. also said Friday that the Islamic State group has been losing ground in Afghanistan.

General John Nicholson, commander of U.S. forces in Afghanistan, told Pentagon reporters IS has lost about 25 percent of its forces there, and that 12 of the terror group’s top leaders have been killed.

Nicholson said IS has been pushed back into three or four districts, mostly in Nangarhar Province, and is down to about 1,200 fighters.

Islamic State units in Afghanistan are still getting financial assistance and other help from IS leaders in Syria, the general said, but that there are no indications extremist fighters from Syria have been trying to reinforce their comrades in Afghanistan.