I want to write on a recent piece in The Wall Street Journal, “Fracking’s Secret Problem—Oil Wells Aren’t Producing as Much as Forecast,” that speaks of an ‘illusory picture’ of prospects for the U.S. shale oil and gas industry. The article is based on the same rhetoric that we have been hearing since the industry’s takeoff back in 2008: well decline rates are too fast and recoverable reserves are overstated, so a conveyor belt of drilling must be installed to simply maintain production. If not, output inevitably plummets.

The WSJ story could just as easily been written a number of years ago.

To illustrate, back in 2012, the now defunct peak oil website Oil Drum infamously compared the U.S. shale industry to the Red Queen in Alice in Wonderland, who quipped that “It takes all the running you can do, to keep in the same place.”

Trump rolls back pollution rules for drilling on U.S. lands

Back on June 21, 2011, The New York Times ran a now forgotten piece also questioning the viability of shale: “Insiders Sound an Alarm Amid a Natural Gas Rush.” Read the article for yourself, but it cited the Federal Reserve Bank of Dallas and a few geologists on their skepticism over the survival of the U.S. shale industry. To them, the bubble was about to burst.

Many years have passed, and the reality is that shale production has surpassed all expectations namely through the constant advance of technologies and improvement of operations.

For example, especially in the wake of the price collapse of 2014-2017, oil and gas companies have been forced to cut their breakeven costs to stay afloat. There were over 100 E&Ps that went belly-up during the period. Now, our shale producers have breakevens of just $50 to $55 per barrel, down from over $80 a few years back.

The efficiency of the U.S. oil and gas business is now the best ever. We are producing more than we ever have, and shale has completely upended the conventional thought that domestic crude oil and gas production peaked in 1970 and 2005, respectively.

Thriving so fast, our production growth for shale oil and gas has proven itself to be systematically underestimated by modeling entities around the world, the big banks included.

Let us use the statistical arm of the U.S. Department of Energy, the Energy Information Administration (EIA), because its stats are publicly available. The Shale Revolution has been rising so quickly that EIA predictions for 5, 10, or 15 years down the road are being surpassed in a single year’s time. At 11.7 million b/d of crude oil, we are now at production levels EIA’s most recent Annual Energy Outlook (February 2018) predicted we would not see until 2030. An obliteration of a 17 year projection in less than 12 months. And the U.S. Department of the Interior believes that we could reach 14 million b/d by 2020.

We are now producing 80% more crude oil than EIA predicted we would be back in 2012.

In 2016, the geniuses at Morgan Stanley claimed that “U.S. production growth won’t come until $80 a barrel.” 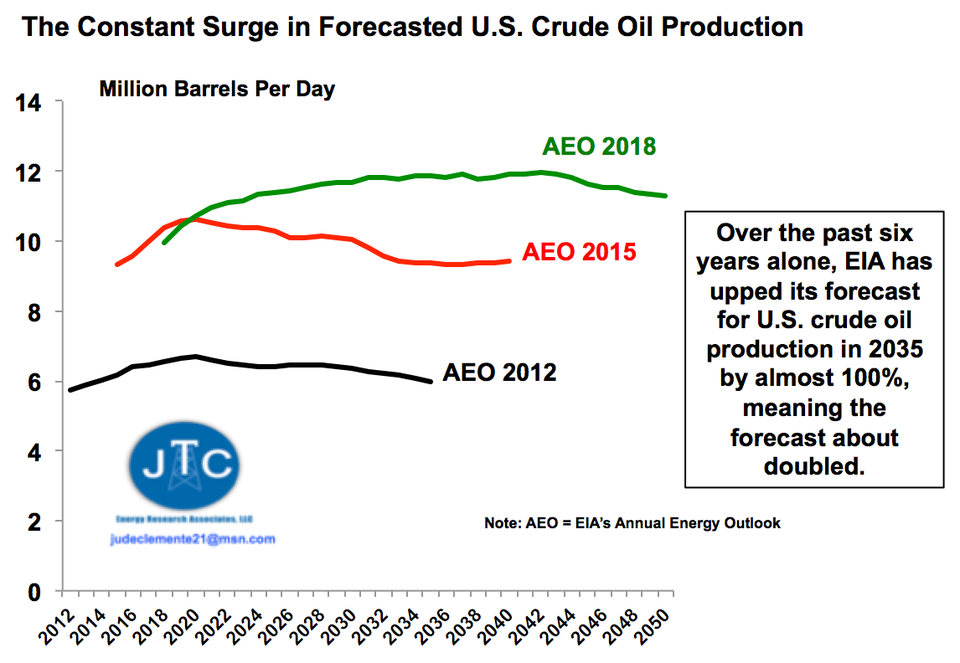 Forecasts for U.S. crude oil production have been going up every year.DATA SOURCE: EIA; JTC

The underestimation of the U.S. shale gas business is just as huge as it is for oil. Today, we are producing ~87 Bcf/d, which is a whopping 30% higher than the 67 Bcf/d EIA projected that we would now be producing back in 2012. Forecasts go higher stunningly fast. For example, from just September to December 2018, EIA upped its forecast for 2019 U.S. gas production by about 7% – or an extra California’s worth of consumption suddenly added as new supply. 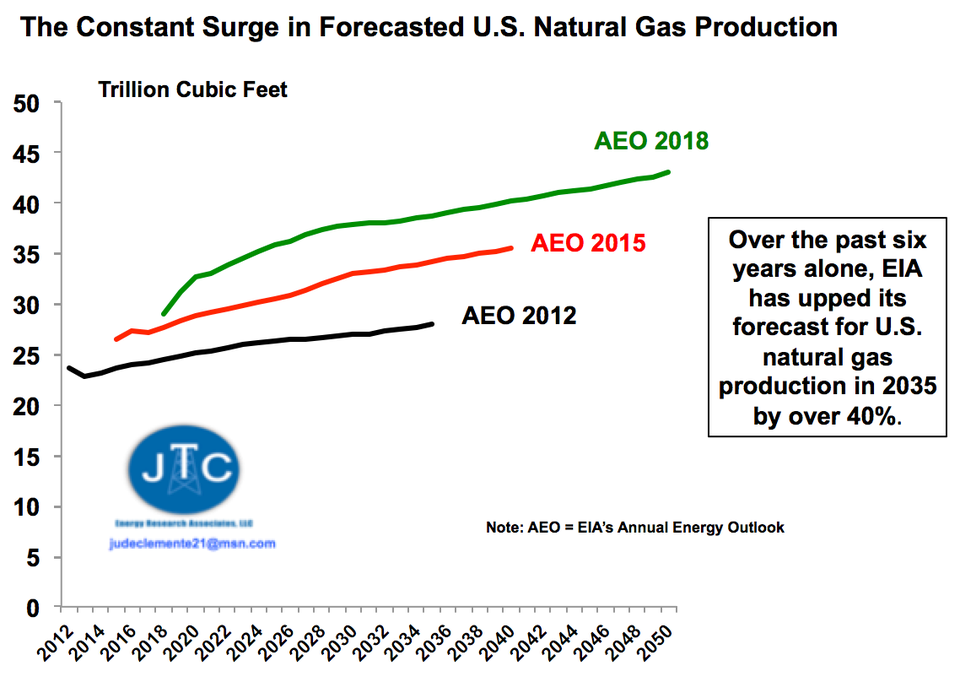 In fact, the Shale Revolution has shown us that the amount of oil and gas that we can produce is essentially unlimited.

In the past 20 years, despite the extraction of almost 50 billion barrels and 475 trillion cubic feet, proven oil reserves have increased 66% to over 50 billion barrels and proven gas reserves have nearly doubled to 310 trillion cubic feet. And as I have documented on Forbes as much as anybody, given the fact that reserves are only a small subset of the overall resource, there is actually far more than even that to produce for oil and natural gas.

Just a month ago, “Feds Discover Largest Oil, Natural-Gas Reserve in History.” The U.S. Geological Survey concludes that shale in Texas and New Mexico “hold 49 years worth of oil.”

There is no question, however, that quick decline rates, low prices, and too much debt are all problems for the U.S. shale industry.

But, an analysis on the sustainability of shale must be broader than simply examining the balance sheets of various oil and gas companies.

With far deeper pockets and integrated solutions,”Why Majors Will Take a Bigger Role in U.S. Shale.”

The U.S. shale business has continued its march forward (and local communities are better off for it).

As the International Energy Agency says, it will be a “journey” to better financial performance, but, critically, the industry is now reaching a “turning point.”

Indeed, unstoppable U.S. and global demand is ultimately the best financial sign for U.S. shale. Contrary to what their opponents want you to think, the need for the critical fuels extracted by the shale industry are only growing with time. Oil for transport and petrochemicals and gas for power and manufacturing. precisely why EIA and IEA consistently model more and more consumption.

Here in the U.S. alone, EIA predicts that oil and gas will still supply over half of our energy in 2050, not a surprise given that wind and solar are intermittent and only compete in the power sector, which is just 45% of our total energy demand.

As far as longer term investment prospects go, the U.S. shale oil and gas business might be the safest of them all: significant-scale replacements simply do not exist.

Do not see our great shale story as a party destined to soon end, but envision shale as an always evolving, burgeoning industry with so much more to come.

They say predictions can never be 100%. History has proven otherwise: the shale naysayers have been wrong every time

Pete Davidson ‘Did What All Douchebags Do’ After His Split From Ariana Grande, Reveals He Hooked Up With a Friend

China's Embassy in the Philippines has lashed out at US National Security Adviser Robert O'Brien over his remarks related...