Donald Trump has said he will consider a proposal to arm school teachers in an attempt to prevent mass shootings, a move certain to prove fiercely divisive.

The US president, holding a listening session at the White House with survivors of last week’s Florida school shooting and others affected by gun violence, claimed that allowing airline pilots to carry and conceal guns had demonstrated the measure could be a success.

“It only works when you have people very adept at using firearms, of which you have many,” Trump said during an emotionally searing session that, extraordinarily, was broadcast live on national television. “It would be teachers and coaches.”

Referring to Aaron Feis, a football coach who used his body as a shield to protect a student during the massacre at Marjory Stoneman Douglas high school in Parkland, the president continued: “If the coach had a firearm in his locker when he ran at this guy – that coach was very brave, saved a lot of lives, I suspect.

“But if he had a firearm, he wouldn’t have had to run, he would have shot him, and that would have been the end of it. This would only obviously be for people who are very adept at handling a gun. It’s called concealed carry, where a teacher would have a concealed gun on them. They’d go for special training and they would be there and you would no longer have a gun-free zone. Gun-free zone to a maniac, because they’re all cowards, a gun-free zone is: ‘Let’s go in and let’s attack, because bullets aren’t coming back at us’.”

Trump added: “An attack has lasted, on average, about three minutes. It takes five to eight minutes for responders, for the police to come in, so the attack is over. If you had a teacher who was adept at firearms, they could very well end the attack very quickly.”

Knowledge of this would act as a deterrent to a would-be attacker, Trump claimed. “You know, a lot of people don’t understand that airline pilots now, a lot of them carry guns, and I have to say that things have changed a lot. People aren’t attacking the way they would routinely attack and maybe you would have the same situation in schools.”

The president asked for a show of hands in the room over the proposal: some were in favour, others were against. “We can understand both sides and certainly it’s controversial,” he acknowledged, promising to discuss it seriously.

It emerged after the shooting at Parkland that there was an armed security guard on site but he did not get the chance to engage the gunman, Nikolas Cruz, on the sprawling campus. In May 2016, during the presidential election, Trump tweeted: “Crooked Hillary [Clinton] said that I want guns brought into the school classroom. Wrong!”

Nicole Hockley, whose six-year-old son Dylan died at Sandy Hook elementary school in Newtown, Connecticut, spoke out against the idea of arming teachers. “It’s not personally something that I support. Rather than arming them with a firearm, I would rather arm them with the knowledge of how to prevent these acts from happening in the first place,” she told Trump.

Safety assessments programmes and interventions for troubled children are vital, she added. “Let’s talk about prevention. There is so much that we can do to help people before it reaches that point, and I urge you please stay focused on that as well. It is the gun, it’s the person behind the gun and it’s about helping people before they ever reach that point.”

Earlier during the session in the state dining room, where some speakers were tearful but composed as they recalled their experiences, Hockley also issued a challenge to the president. “This is not difficult,” she told him. “These deaths are preventable. And I implore you: consider your own children. You don’t want to be me. No parent does.”

During the meeting Trump also asserted that he would be “very strong” on background checks for gun buyers as well as mental health issues. He sat in the middle of a semi-circle listening intently as six survivors of last week’s shooting and bereaved parents from Parkland, Columbine, and Sandy Hook took turns to address him.

Crooked Hillary said that I want guns brought into the school classroom. Wrong!

Sam Zeif, 18, a Parkland student whose text messages with his brother during last week’s shooting went viral, fought back tears as he told Trump: “I turned 18 the day after. Woke up to the news that my best friend was gone. I don’t understand why I can still go in a store and buy a weapon of war, an AR. I was reading today that a person 20 years old walked into a store and bought an AR-15 in five minutes with an expired ID. How is it that easy to buy this type of weapon? How are we not stopping this after Columbine, after Sandy Hook, sitting with a mother that lost her son? It’s still happening.” 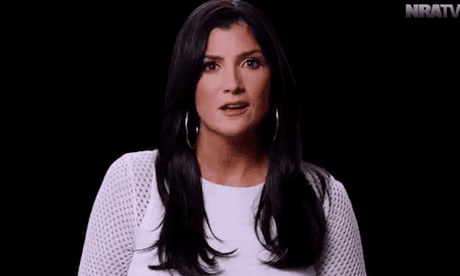 Andrew Pollack, whose 18-year-old daughter Meadow was killed at Stoneman Douglas, reflected the candid anger of many when he took the microphone. “We’re here because my daughter has no voice – she was murdered last week, shot nine times,” he said. “How many schools, how many children have to get shot? It stops here, with this administration and me.”

Pollack, his voice rising with raw emotion, added: “It should have been one school shooting, and we should have fixed it, and I’m pissed because my daughter, I’m not going to see again.”