A final peace agreement between Colombia’s government and a national guerrilla movement is to be signed Monday, bringing to an end the longest-running insurgency in the Western hemisphere.

“It’s the end of the last full-blown guerrilla warfare inspired originally by Cuban and Soviet ideology against democratic institutions in this hemisphere,” is how it is characterized by a senior U.S. administration official.

The conflict between the government and the Revolutionary Armed Forces of Colombia (FARC), whose funding was primarily derived from the country’s illicit cocaine industry, is blamed for leaving dead more than 250,000 people and displacing at least five million.

Consider the Possibility That Trump Is Right About China

Sixteen heads of state and two dozen foreign ministers, including U.S. Secretary of State John Kerry, are expected to attend the signing ceremony at the convention center in the Caribbean port city of Cartagena, founded in the 16th century.

“Peace will begin on Monday when I and the president shake hands,” said FARC maximum leader Rodrigo Londoño (known as Timochenko) on Saturday as he left the remote southern plains and boarded a helicopter operated by the International Committee of the Red Cross, along with about 40 other rebel commanders.

FARC has also agreed to cooperate with de-mining. Colombia has the second highest number of land mines in the world after Afghanistan.

The United States is taking some of the credit for bringing about the peace pact, which diplomats in Washington describe as a transformational event for Colombia and the region and one that President Barack Obama has described as one of the most important achievements during his presidency.

Colombian president Juan Manuel Santos, who has staked his reputation on ending the war, had asked the United States to increase its engagement in the four year negotiating process, which mostly took place in Cuba, and a special envoy, Bernard Aronson, was named who participated in the talks.

“It’s about far more than just giving up weapons of war,” said a senior U.S. administration speaking on condition he not be named. “It really includes a major transformation of Colombia itself, it includes a far-reaching commitment to bring government services, security, police, education, health, roads, economic development to the vast stretches of the interior that have been left out of national life.”

Proponents of the deal also note the commitment to work with farmers to get land titles, access to transportation networks for their harvests of legal crops, rather than cocoa leaf production. It also includes transitional justice efforts that will hopefully lead to reconciliation in the countryside.

They also predict it will be the catalyst for Colombia’s GDP to grow at twice its current place and triple foreign directly investment following years of negative growth and capital flight. 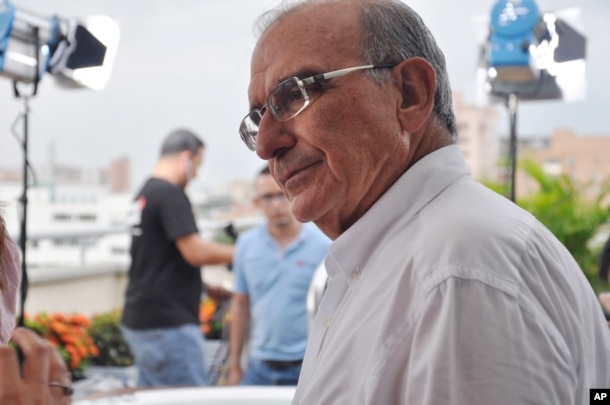 But not everyone supports the deal on which Colombians will render a verdict in a nationwide binding referendum on October 2.

Recent public opinion polls in the country show a double digit advantage for the “Yes” camp, despite widespread loathing for FARC and a robust “No” campaign spanning the political spectrum.

“The consequences of a loss would be catastrophic,” Humberto De la Calle, the government’s chief negotiator, said in announcing the agreement.

Former President Alvaro Uribe contends the deal gives total amnesty to drug trafficking by labeling it a political crime and “Colombians have learned over decades of attempted negotiations with other terrorist groups it is that impunity always becomes the seed of new forms of violence.”

The current president argues compromise was necessary to convince the rebels to turn over their weapons after more than a half century of conflict.

The deal is the best his government could achieve, Santos says, to convince thousands of rebels to stop causing bloodshed and havoc through much of the country. 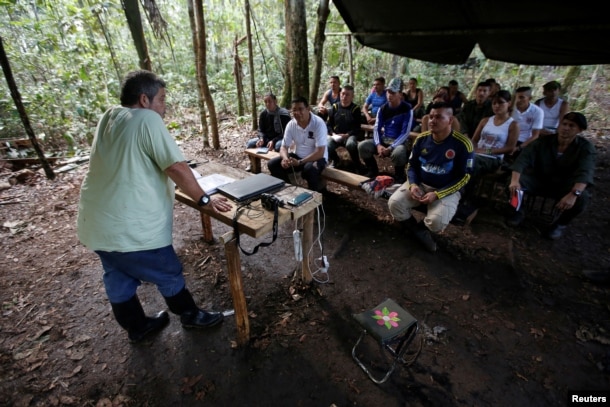 FILE – Marco Leon Calarca, (L) a member of the Revolutionary Armed Forces of Colombia (FARC), talks to members of FARC, at a camp to prepare for an upcoming congress ratifying a peace deal with the government, near El Diamante in Yari Plains, Colombia.

The peace pact also includes a large new security commitment by Colombia’s government to go after the extremely violent bandas criminales (known by the acronym BACRIM), some of which are successors to right-wing paramilitaries engaged in cocaine production and smuggling, killings of right activists and have clashed with FARC fighters and other left-wing guerrillas.

The immediate, biggest threat to the October 2 peace referendum could be low voter turnout. To be valid it must be endorsed by at least 13 percent of all registered voters. A 2003 referendum on political reform backed by Uribe failed to cross the threshold.

It’s unclear what happens if the referendum is defeated.

“Although the FARC has reiterated a commitment to peace in recent months and said it will not return to war even if the accord isn’t approved, the fear I’ve heard is that a strong “no” vote would leave those favoring a military solution with the upper hand,” according to Ginny Bouvier, senior advisory for peace processes at the U.S. Institute for Peace.

“It could also lead to a resurgence of violence in the countryside against social leaders and politicians who have led the charge for victims’ rights to restitution and reparations.”