A boat fire off Santa Cruz Island that left 25 people dead and nine missing sent shockwaves throughout the diving community and across California. Residents and divers said a tragedy of such scale was unimaginable.

Rescuers continued their search overnight along the coast of Santa Barbara, where a diving tour boat was engulfed in flames at around 3.15am on Monday and ultimately sank. Five crew members escaped and were rescued but 33 passengers and another crew member were found dead or were still missing, with little hope of good news.

“I’m speechless. We are all thinking that could’ve been us,” said Ralph Clevenger, a Santa Barbara photographer and diver who has taken photos for Truth Aquatics, the local company that owns the 75ft boat. “I was trying to recall in the world an event of this scale in the industry. I can’t think of anything. The death toll is just unheard of. This is a complete shock.” 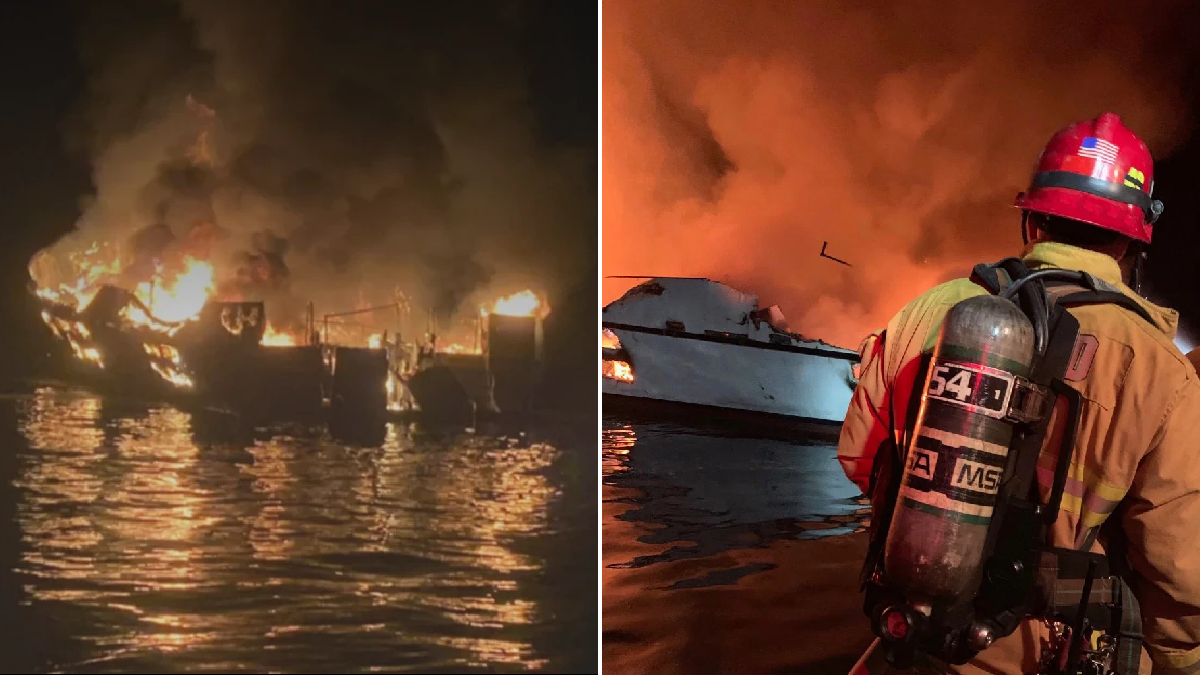 Law enforcement officials released minimal information, saying those killed came from across California and that DNA testing would likely be needed to identify some of the bodies. Nyx Cangemi, a US coast guard official, told the Guardian late on Monday authorities had recovered 20 bodies and five had been seen inside the boat but were not immediately reachable.

Family members identified one of the missing as Kristy Finstad, a 41-year-old marine biologist who was leading the three-day Labor Day weekend diving expedition on the boat, the Conception. A couple who helped rescue survivors told reporters they were injured and distraught. One talked about celebrating a 17-year-old girl’s birthday hours before the fire.

“This is such a small community, and I have relatives who dive,” said Orlando Aldana, a 42-year-old Santa Barbara resident who feared he might have known some of the victims. As the search went on and the body count rose, he said he was relieved that he had not received any news about friends or family.

But the number of casualties and the way they died was tough to process, said Aldana, who came to the Santa Barbara harbor with 34 candles. “If the boat went up in flames, you’d think they would jump in the water,” he said. “They must have been trapped. They couldn’t get to the exit.”

Authorities said it was likely the passengers were all asleep, in tight quarters below deck. “This is probably the worst-case scenario,” said Santa Barbara county sheriff Bill Brown.

At a makeshift memorial, Pedro Lopez, a pastor at Our Lady of Guadalupe in Santa Barbara, dropped off a bouquet of flowers. He said the deaths were terrifying to many different communities. “It’s affecting all of southern California, and certainly the community of people who use the boats,” said Lopez, a fisherman. “It hits close to home. A lot of people are worried.”

Next time he went out in a similar vessel, he said, he would think about the layout of a boat and how he would escape if he had to. “I’ve never heard of anything like this happening,” he said. Diving experts and participants in similar expeditions emphasized that this kind of fire appeared to be unprecedented.

Clevenger, who had been on the Conception and knows Truth Aquatics’ captains and its owner, Glen Fritzler, said crew members were well-trained professionals, some of the best in the business. “They were incredibly serious about safety,” he said. “The owner works on the boat personally and his crews are trained so well and very impressive. That’s what makes this even more tragic.”

Investigators did not immediately share information about what might have caused the fire, but said the boat was in compliance with all regulations and had received annual inspections.

Gary Pilecki, a California diver whose scuba club has worked with Truth Aquatics for years, said he never had any doubts about safety. “That’s why we keep coming back every year,” he said. “They have an excellent safety record.”

Pilecki said divers do not typically worry about fires and are more concerned with the potential for currents to sweep them out to sea, decompression sickness while diving and shipwrecks. “Fires are the last thing on my mind on those boats,” he said. “We have no idea how this could have happened.”

China's Embassy in the Philippines has lashed out at US National Security Adviser Robert O'Brien over his remarks related...