Denver — At the governor’s mansion here on Friday, past the columned entryway and the French chandeliers, Emmy Ruiz placed a hand on the shoulder of a fellow Hillary Clinton operative. “It’s like we’re at a funeral,” said Ms. Ruiz, dressed — perhaps coincidentally — in black.

Just days after Donald J. Trump’s surprise presidential victory, the nation’s professional political forecasters and persuaders — the pollsters, the ad creators, the campaign strategists — gathered in Denver for their annual convention. It was supposed to be a celebration of big data and strategic wizardry for a multibillion-dollar industry that has spent nearly a century packaging political candidates.

Instead, the conference of the International Association of Political Consultants felt like a therapy session for a business in psychological free fall.

“I need to make sure I state this very clearly so that nobody thinks that I feel otherwise: I got this really wrong,” said Chris Anderson, a Democratic pollster who had predicted a Clinton win, speaking during a session before the gathering at the governor’s mansion. “We’re going to continue to learn from Donald Trump how to effectively message,” he said. “Because he can do it really well.” 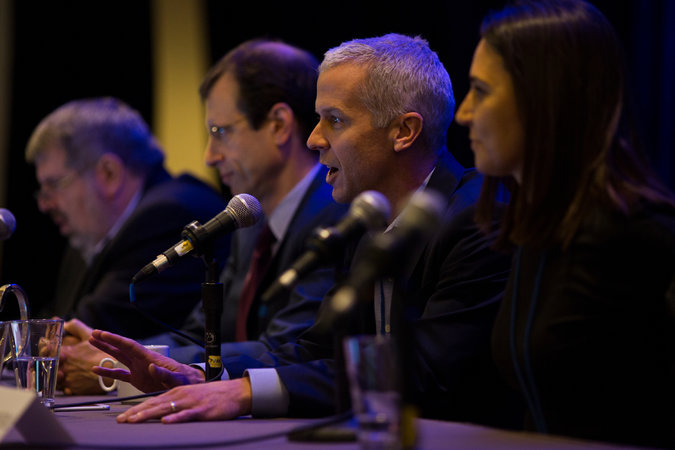 “I need to make sure I state this very clearly so that nobody thinks that I feel otherwise: I got this really wrong,” Chris Anderson, a Democratic pollster, said at the International Association of Political Consultants gathering. Credit: Nick Cote for The New York Times

The business of political consulting was born, many say, in 1933 when the newspaper writers Clem Whitaker and Leone Baxter were hired to defeat Upton Sinclair in his antipoverty bid for governor of California. (When Mr. Sinclair lost, he blamed the defeaton a “staff of political chemists.”) The industry has since evolved into a sophisticated army of data analysts, message crafters and others whose firms turn billions of dollars given to candidates and their surrogates into services. Television advertisements. Email lists. Get-out-the-vote strategies.

But everything about this election seemed to throw into question the value of those tactics — and even of the consultants themselves. In the end, Mrs. Clinton’s battalion of advisers were defeated by a wild, seemingly unchoreographed candidate who, according to the most recent data, spent more money on shirts, hats, signs and similar items than on field consulting, voter lists and data.

Over the weekend, 150 or so participants moved between a high-ceilinged conference room at the Westin hotel and other activities, including the reception at the governor’s mansion and a dinner at an adobe fort in the foothills of Rocky Mountains. (Organizers nixed a tour of a marijuana grow house after too many people expressed interest.)

In one session dedicated to polling, three panelists who had predicted Mrs. Clinton would win took to the stage, framed by a royal blue backdrop. Instead of PowerPoint presentations and state-by-state voter analyses, there was morose self-flagellation, as some admitted they had spent the election seduced by “magical thinking,” unable to envision a Trump presidency and therefore blind to the story in front of them.

Margie Omero of PSB Research theorized that pollsters had held back Trump-leaning data, unwilling to release something that looked like an outlier. Or that Trump supporters had simply not told pollsters the truth, either embarrassed by their choice or angry at callers whom they perceived as part of a conspiracy against him. 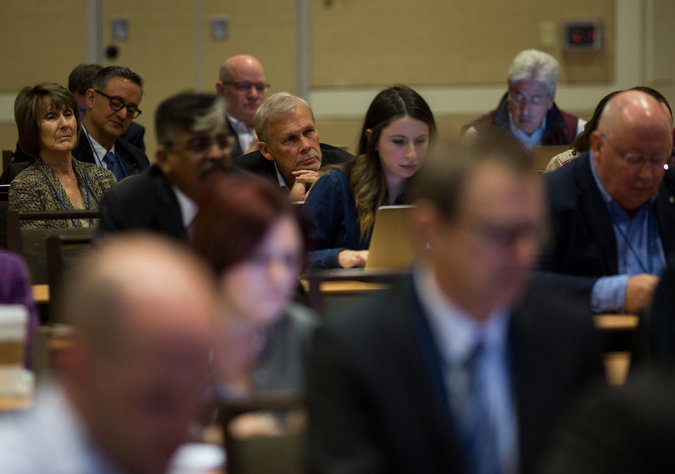 Political consultants and pollsters listening to a panel of speakers at the International Association of Political Consultants conference. Credit: Nick Cote for The New York Times

“It was impossible to conceive of an incoming President Trump,” said Ms. Omero, whose firm has worked for both former President Bill Clinton and Hillary Clinton over the years. “A couple-point advantage seemed comforting to prevent something so catastrophic.”

Mr. Anderson, the Democratic pollster, said he should have seen the win all along.

“The story that played out was right in front of me,” he said. (Mrs. Clinton never went above 45 percent in his surveys.) “But my basic assumption, and why I think why I was wrong was I continued to say to myself: ‘This segment of voters, about 15 percent, who view both of them unfavorably, they think Clinton has the judgment, temperament and qualifications to be president. They do not think the same of Trump.’ So I believed that at the end of the day they would vote for Clinton.”

It appears they did not.

In one of the more raucous portions of the conference, consultants assembled for a post-mortem session on campaign strategy. Onstage was Ms. Ruiz, who ran Mrs. Clinton’s operation in Colorado, and Rich Pelletier, a deputy campaign manager for Senator Bernie Sanders of Vermont, whom Mrs. Clinton faced in the Democratic primary race. Between them was Wayne Allyn Root, a Trump adviser wearing a pinstripe suit, a red tie and a very, very broad smile.

“He was going to win from the beginning. Nobody got it. And I got it. I knew it,” said Mr. Root, describing a campaign strategy based more on gut and anecdote than science. “No matter how bad the polls look, they are meaningless because the anger and volatility of this electorate does not show up in the polls. My people are not telling the pollster they’re for Donald Trump.”

His presentation was met with grumbles, then shouts, and finally calls from an audience of angered consultants. “It’s rigged! It’s rigged!”