Police: 10 dead, 15 injured when van slams into pedestrians in Toronto

Police: 10 dead, 15 injured when van slams into pedestrians in Toronto

A white van jumped a curb and slammed into pedestrians Monday on a crowded street, killing at least 10 people, injuring 15 and leaving witnesses stunned by the carnage.

The driver was arrested near the scene, Toronto police said. Details remain sketchy and police said a cause or motive for the 1:30 p.m. incident is uncertain. Canada’s minister of public safety, Ralph Goodale, said it’s too soon to say whether the crash is a case of international terrorism, and the nation has not changed its terrorism alert level.

But Toronto’s police chief, Mark Saunders, said the driver — who he identified as Alek Minassian — appeared to intentionally target pedestrians.

How Canada Gets Squeezed Between China And The U.S.

Boeing: US orders review of 737 Max licence to fly

Should Cronos Group Scale Up Its U.S. Business?

Toys ‘R’ Us Canada donates over 700,000 toys just in time for Christmas

Saunders said the investigation is still in the early stages and nothing has been ruled out. “We’re working collaboratively not just on a local level but on a federal and provincial level,” he said. “We’re looking strongly at the exact motive.”

Minassian, 25, is a resident of the Toronto suburb of Richmond Hill. He had not been known to police previously, Saunders said.

A witness, Phil Zullo, told Canadian Press that he saw police arresting a man who had been driving a Ryder rental truck and saw people “strewn all over the road” along a busy section of Yonge Street and Finch Avenue.

“It must have seen about five, six people being resuscitated by bystanders and by ambulance drivers,” Zullo said. “It was awful. Brutal.”

Ali Shaker, who was driving near the van, told Canadian broadcast outlet CP24 that the driver appeared to be moving deliberately through the crowd at more than 30 mph.

“He just went on the sidewalk,” a distraught Shaker said. “He just started hitting everybody, man. He hit every single person on the sidewalk. Anybody in his way he would hit.”

Another witness, Ham Yu-Jin, told The Toronto Star, “I was in my car and I saw a white van going on the sidewalk. … I heard a big bang and the van hit a bus shelter and hit people. I turned my car on and chased the van. I’m so lucky, I could have been hit.”

Sunnybrook Health Sciences Center, the hospital where some of the injured people were taken, said that eight people were being treated there and that precautions were being taken to protect them.

“Sunnybrook’s Emergency Department has been locked down as an added precaution and access to the … campus is being controlled,” the hospital said in a statement. Five victims are in critical condition, two are in serious condition, and another is fair, the hospital tweeted Monday night.

The incident occurred as Cabinet ministers from the major industrial countries were gathered in Canada to discuss a range of international issues in the run-up to the G7 meeting near Quebec City in June.

“At this point it’s too early to tell what, if any, motive there was,” Toronto police spokeswoman Meaghan Gray said.

Police said the crash occurred in the Lastman Square area, not far from the city center. Nearby streets were closed and the closest subway stop was shut down.

“Our hearts go out to anyone affected,” Trudeau said.

Tory said his “thoughts are with those affected by this incident” and said the tragedy happened as people were out enjoying beautiful weather.

“There were a lot of pedestrians out … enjoying the sunny afternoon,” the mayor said. 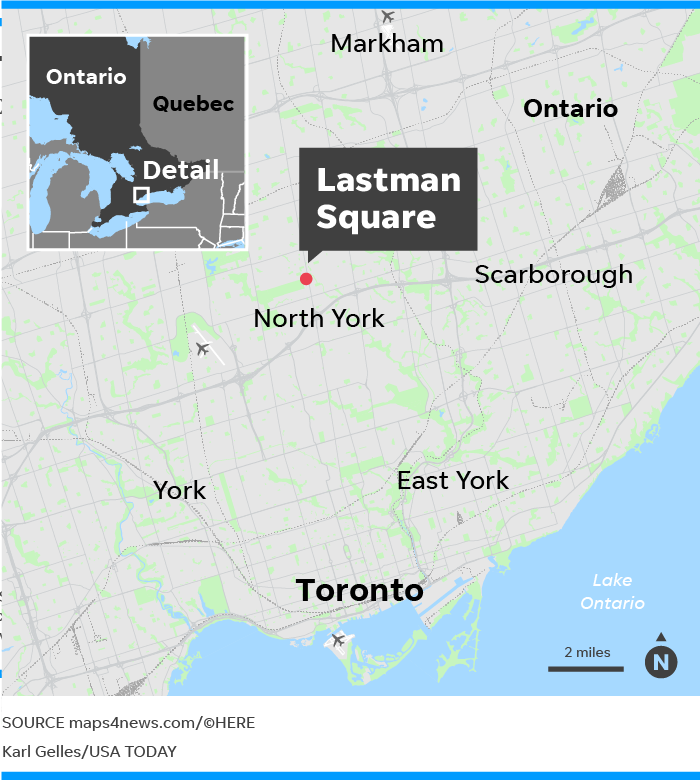 Arizona's governor puzzled on why teachers want to walk out: 'We are delivering ... what we believe they deserve'

In recent months, the U.S. began negotiations for a bilateral free trade agreement with Kenya. These negotiations are aligned...