Merkel May Have Promised Too Much in Carbon Pollution Fight

Merkel May Have Promised Too Much in Carbon Pollution Fight

As German Chancellor Angela Merkel embarks on coalition talks to bed down her fourth term in office, a promise made shortly before her re-election may come back to haunt her. At least that’s the view of nine analysts and researchers from Berlin to London who all say her target of reducing carbon emissions in Europe’s biggest economy by 40 percent in 2020 will probably fail. On Sept. 14, Merkel went as far as saying that she will find ways to meet the goal, no matter what. At the end of last year, those emissions were down 27 percent from 1990 levels.

“I think we all know that we’re pretty far away from those, and I personally believe it will be extremely challenging to try to reach,” said Klaus Schaefer, chief executive officer of Uniper SE, for which fossil fuels accounted for 57 percent of profit in the first half. Merkel’s stoic approach to meet the non-binding 2020 goal would most likely come down to how tough the governing coalition is prepared to be on the nation’s biggest polluters. Plants burning coal still produced about 40 percent of the nation’s power last year. 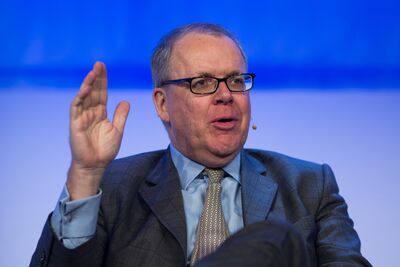 Honolulu Sues ExxonMobil For Ending The World Or Something

The Realpolitik of Greta Thunberg

Trump: US Doesn’t Seek Conflict But Will Defend Its Interests

But she’s got a problem. Ploughing up acre after acre, sometimes moving whole villages, to get to the lignite Germany still very much relies on will put her on collision course with voters expecting her to deliver on the promise to cut emissions. At the same time, closing down sites would irk unions representing thousands of workers in some of the most impoverished parts of the country. “It’s up to the next government to make an exerted effort in the short window available to land on target,” said Michael Schroeren, a spokesman for the German environment ministry in Berlin. “This could be achieved in the energy sector in connection with other sectors.”

Germany’s work toward meeting its target may face also international scrutiny in November as climate envoys from around the world will descend on its old capital of Bonn for United Nations talks that will be presided over by Fiji The talks are meant to beef up the rules of the Paris agreement. So far, climate talks have have failed to make much headway in cutting emissions in the two years since the Paris deal was struck, with global emissions steady at record levels.

Berlin-based environmental think tank Agora Energiewende reckons Germany will miss its target by about 10 percentage points. Emissions reductions “won’t be a near miss but a booming failure,” Agora researchers wrote in a report. As many as 135,000 people work in the traditional power sector and associated coal mining industry. Closing down much of the country’s coal power output would result in the loss of thousands of jobs, according to Jahn Olsen, an analyst in London at Bloomberg New Energy Finance. But there’s no way the goal can be met by improving energy efficiency or encouraging electric car use at the pace required within four years, he said.

The country could theoretically meet the reduction level through buying international emissions credits or allowances, Olsen said. But that option would counter earlier statements by the nation that it intends to meet its target domestically, making it “politically unpalatable,” he said. 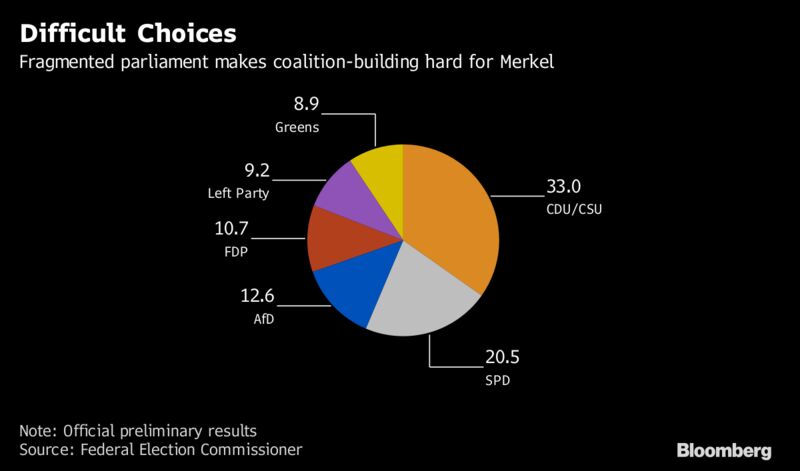 Merkel’s Christian Democratic Union-led bloc won the weekend ballot with its worst performance since 1949. Her party needs a three-way alliance with the pro-business Free Democratic Party and the Greens, which could take months of negotiating, Barclays Plc said Monday in a note. The coalition negotiations between parties with such different positions mean Germany probably won’t be able to put together a plan to hit the target, said Deepa Venkateswaran, an analyst in London at Sanford C. Bernstein & Co. “The Greens want it and the FDP are against,” she said. “They might agree to a long-term exit from coal, but it won’t be as aggressive as the Greens want.”

Tensions are continuing to escalate between Beijing and Taipei, stoked by the United States’ provocative maneuvers in the region....