She is married to the most powerful man in the world. She does her duty and remains silent as he utters falsehoods, hurls insults and admits paying hush money to an actor in adult films who alleges an extramarital affair. Little wonder that one columnist dubbed her the “Slovenian Sphinx”. 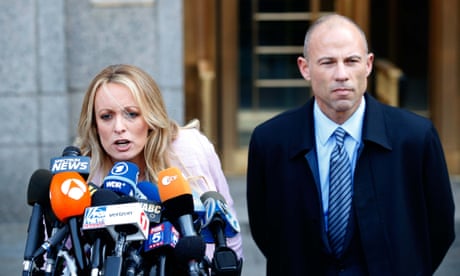 This week, however, Melania Trump is poised to step into the limelight. First her spokeswoman, Stephanie Grisham, told National Public Radio the first lady would announce policy initiatives focused on children, in particular dealing with social media, health and addiction. Then the White House said the announcement would happen on Monday in the Rose Garden, a venue usually reserved for presidential press conferences.

For supporters, it will be a welcome, if overdue, emergence, building on her deft hosting of a state dinner for the French president, Emmanuel Macron. For critics, it will be too little too late, a futile gesture by a woman who was dealt a bad hand and played it badly, and whose relationship with Trump offers rich pickings for gossips.

“The whole country right now is in a bad marriage with Donald Trump and can’t escape his shadow, so how can she?” asked Bill Galston, a former policy adviser to Bill Clinton, the last president to suffer marital problems in the public gaze.

A polyglot, former model and only the second first lady born outside the US, Melania made a slower start than most presidential spouses. She was largely absent from Washington during the first six months of the administration, preferring to remain at Trump Tower in Manhattan so her son Barron would not have to change schools. With Melania a “nonpresence”, wrote the author Michael Wolff, White House staff referred to Trump’s daughter Ivanka as his “real wife”.

The whole country right now is in a bad marriage with Donald Trump and can’t escape his shadow, so how can she?

She moved to the White House in June 2017 but continued to maintain a low profile. At the start of this year, however, she hired Reagan Thompson, 27, as policy director and slowly came out of her shell. There were even some subversive gestures – for those who chose to see them. Melania travelled to the State of the Union address separately from Trump and wore an all white suit, an outfit associated with Trump’s election rival, Hillary Clinton.

She recently convened a White House discussion on cyberbullying, an issue with ironic resonance given her husband’s habit of bullying foes with demeaning nicknames on Twitter. “I’m well aware that people are sceptical of me discussing this topic,” she said.

But her defining moment, at least so far, was the first state dinner of the Trump presidency, for which she did not hire an event planner and took charge of arrangements herself. Melania earned rave reviews for everything from flowers to food to fashion, wearing a black Chantilly lace Chanel haute couture gown in a nod to her French guests.

Less happily, TV cameras zoomed in on Melania resisting Trump’s fumbling attempt to hold her hand before eventually surrendering, an awkward episode that proved catnip to comedians. It was not the first such incident between the couple and contrasted with Melania’s broad smile while socialising with former presidents and first ladies in Houston, at the funeral of Barbara Bush.

Then, in a rambling phone interview on Fox News’s Fox & Friends, Trump was asked what he had bought his wife for her 48th birthday. “Maybe I didn’t get her so much,” he replied. “I got her a beautiful card. You know I’m very busy.”

Last week, it got worse. Trump changed his story and acknowledged that he had reimbursed his lawyer, Michael Cohen, for the $130,000 paid to Stormy Daniels to buy her silence just days before the 2016 presidential election. Daniels alleges that she had a sexual encounter with Trump at a celebrity golf tournament in Nevada in 2006, months after Melania had given birth to Barron. The thrice-married Trump denies the claim.

Galston, a senior fellow at the Brookings Institution in Washington, said: “I don’t know how to get inside her head but if she’s wired the way most people are, I can’t imagine she’s feeling warm and fuzzy toward her husband right now.”

He added: “Whatever she signed up for, she didn’t sign up for this. Being first lady is not the fulfillment of a life’s dream for her. I don’t think she’s a public person. She finds herself in a position she never expected to be in and she now has to decide what to make of it.”

‘The standard of glamour’

The state visit by the French president invited comparisons with Jackie Kennedy, who proved such a hit on a visit to Paris in 1961 that President John F Kennedy told the press: “I am the man who accompanied Jacqueline Kennedy to Paris, and I have enjoyed it.” Galston noted: “Jackie Kennedy set the standard of glamour and visibility against which every first lady has been measured since.”

Margaret Leslie Davis is the author of Mona Lisa in Camelot, which recalls a 1962 White House dinner for the French culture minister André Malraux, who was so charmed that he whispered a promise to Jackie that he would lend Leonardo da Vinci’s masterpiece to the National Gallery in Washington. Davis sees parallels in the Melania-hosted state dinner for Emmanuel and Brigitte Macron: “From what I read, the place was absolutely beautiful and it was a superb effort to intertwine French history and American panache.

“Jackie Kennedy and Melania Trump did everything they could to provide historical meticulousness in every detail. But there was one important difference: Jackie wanted the press at her event. She wanted the most publicity and she wanted to be on the stage. She was on fire to elevate and advance the arts in America. I understand Melania did not want the paparazzi element and no press were invited.”

Even without celebrity glamour, the dinner appears to have been an elegant affair that went off without a hitch. Anita McBride, former chief of staff to the ex-first lady Laura Bush and now based at American University in Washington, gave it the stamp of approval.

“It was beautiful,” she said. “The White House looked seamless and elegant. There were no mistakes. There was a lot of focus on tradition and on the relationship between the couples. She gets a lot of credit and is showing a level of comfort in her role.”

Chris Ruddy, chief executive of the conservative Newsmax Media and a close friend of Donald Trump, agreed: “It was a home run for her and the president. Everyone is discovering what those of us who know her have understood for a long time about her class, grace, charm and panache. She knows how to handle herself. She’s not awkward and is not overdone in any way. Behind the scenes she’s very influential with him and you’re now seeing the outward manifestations.”

Ruddy denied speculation that Melania is unhappy. “She always seems to me quite content. She’s never complained and seems very happy about the role.”

He also dismissed the chatter over her seeming reluctance to hold her husband’s hand. “I think people are reading way, way too much into it. She’s saying to him it’s not appropriate to hold hands in that moment; she’s a very appropriate person. It’s not because of any problem in the relationship. They look like teenage lovers when they walk around Mar-a-Lago [Trump’s luxury estate in Florida].”

‘A different first lady could have been quite helpful’

Other commentators, however, found the body language jarring. Larry Jacobs,director of the Center for the Study of Politics and Governance at the University of Minnesota, said: “It’s peculiar beyond imagination. To see Melania slapping his hand away adds to the growing list of bizarre features of the Trump presidency.”

Past first ladies have proved adept at reaching across the partisan divide, Jacobs noted. Barbara Bush appealed to Democrats with her literacy programme; Michelle Obama, whose husband provoked bitter opposition, nevertheless reached many Republicans with her exercise and healthy eating initiatives.

“Over the last three or four decades first ladies have been a valuable political tool for presidents to appeal to independents and even folks in the opposing party,” Jacobs said. “I think a different first lady could have been quite helpful to Trump. He has no access to mainstream America; he’s alienated women and independents. She could have been an ambassador of goodwill like Michelle Obama or Barbara Bush.”

Melania, however, has in Jacobs’ view fallen short. “This is probably the most disengaged first lady we’ve had in the modern era. It’s a bit late in the game for her to be emerging now. It’s not what we’ve seen other first ladies do. She’s missing in action.”