Kerry Heads to London for Syria Talks With European Allies

Kerry Heads to London for Syria Talks With European Allies

On a day when Turkish-backed Syrian rebels captured a northern Syrian town from Islamic State symbolically important to the jihadists, the top U.S. diplomat is also meeting with Washington’s European allies in London Sunday to discuss how to bring a halt to the Syrian conflict, now in its sixth year.

John Kerry said a meeting in Switzerland with his Russian counterpart, Sergei Lavrov, and several Middle Eastern countries a day earlier had produced “several ideas that need to be quickly followed up,” but he did not elaborate.

Trump or Biden? World waits nervously for US vote count

What the US election means to the Iranian government—and people

The talks in Lausanne opened less than two weeks after Washington suspended bilateral talks with Moscow following the collapse of a shaky cease-fire in the divided city of Aleppo. Kerry told reporters that negotiators were “working very hard” to reach a cease-fire agreement in the war-torn city. 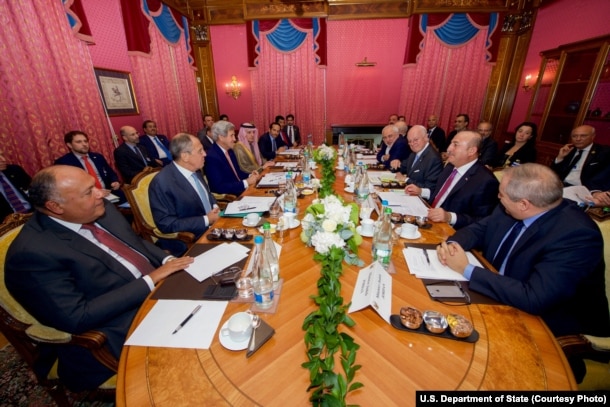 The United States and its coalition partners accuse the Syrian government of President Bashar al-Assad and his Russian allies of a deadly and indiscriminate bombing campaign in rebel-held eastern Aleppo.

Monitors say Russian and Syrian airstrikes and artillery have killed hundreds of civilians in the city and cut off more than 250,000 others from critically needed supplies since September. 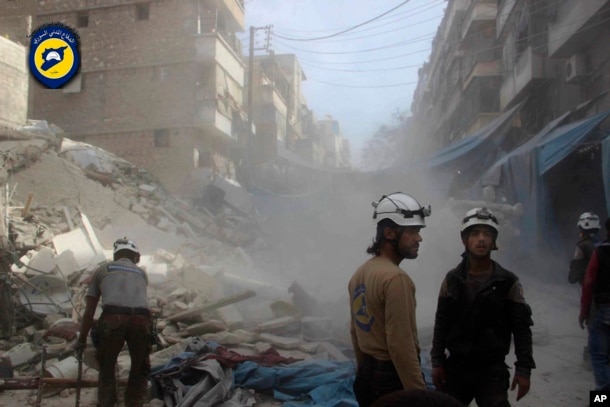 For its part, Russian diplomats insist the strikes are targeting extremists. They have repeatedly blamed Washington for failing to separate extremist fighters from the larger rebel fighting force and from the city’s civilian population. 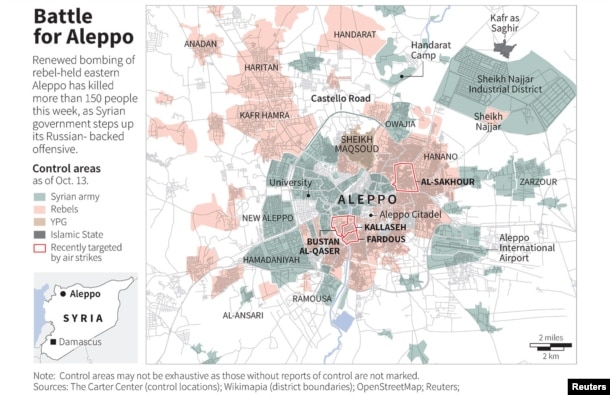 Map showing control areas around the Syrain city of Aleppo, as of Oct. 13, 2016 Fighters from the Free Syrian Army fire a machine gun mounted on a vehicle deployed during fighting against Islamic State group jihadists on the outskirts of the northern Syrian town of Dabiq, Oct. 15, 2016.

Dabiq, 10 kilometers from the Turkish border, is cited in apocalyptic Sunni prophecy as the site of an end-of-times battle between Christian forces and Muslims. Islamic State named its online magazine after the town in 2014. Every new edition of Dabiq opens with a quote by Abu Musab al-Zarqawi, the mentor of IS leader Abu Bakr al-Baghdadi, claiming, “The spark has been ignited in Iraq, and its flames will grow until they burn the Crusader armies in Dabiq.”

Monitors from the Britain-based Syrian Observatory for Human Rights said the force seized several strategic areas near the town Saturday. Heavy shelling was reported as the force prepared for battle less than two kilometers from the center of the fortified town.

Turkey launched unprecedented cross-border strikes against IS strongholds on August 24, just days after linking IS fighters to a suicide bombing at a wedding in the nearby Turkish city of Gaziantep that killed 51 people. At the time, Turkish Foreign Minister Mevlut Cavusoglu said the Syrian frontier must be “completely cleansed” of Islamic State.

Turkish President Recep Tayyip Erdogan vowed Saturday to declare “a terror-free safe zone of 5,000 [square] kilometers,” a border area that would include territory already captured in the offensive.