Greenland Tells Trump it is Open For Business, Not for Sale

Head of US food and drug agency resigns

Over 40% of Greenland experienced melting yesterday, with total ice loss estimated to be more than 2 gigatons (a gigaton is equal to 1 billion tons).

While Greenland is a big island filled with lots of ice, it is highly unusual for that much ice to be lost in the middle of June. The average “melt season” for Greenland runs from June to August, with the bulk of the melting occurring in July.

To visualize how much ice that is, imagine filling the National Mall in Washington DC with enough ice to reach a point in the sky eight times higher than the Washington Monument (to borrow an analogy Meredith Nettles from Columbia University gave to the Washington Post.)

Yesterday (13th June), we calculate #Greenland #icesheet lost more than 2 Gt (2 km³) of ice,, melt was widespread but didn't quite get to #SummitCamp which was just below 0°C

The high melt is unusual so early in the season but not unprecedentedhttps://t.co/Ftg0fkC7AK pic.twitter.com/Y4jQ1FoFRZ

The sudden spike in melting “is unusual, but not unprecedented,” according to Thomas Mote, a research scientist at the University of Georgia who studies Greenland’s climate.
“It is comparable to some spikes we saw in June of 2012,” Mote told CNN, referring to the record-setting melt year of 2012 that saw almost the entire ice sheet experience melting for the first time in recorded history.
This much melting this early in the summer could be a bad sign, indicating 2019 could once again set records for the amount of Greenland ice loss.
Mote explained how snow and ice melt off the Greenland ice sheet, especially early in the season, makes it easier to for additional melt to occur later in the summer.
White snow and ice, which is bright and reflects the sun’s rays back into space, reduces the amount of heat that is absorbed and helps to keep the ice sheet cold (a process known as “albedo”).
“These melt events events result in a changed surface albedo,” according to Mote, which will allow more of the mid-summer sun’s heat to be absorbed into the ice and melt it.

Predictions for a record melt season

According to Mote “all signs seem to be pointing to a large melt season,” and he is far from the only scientist to think so.
Jason Box, an ice climatologist at the Geological Survey of Denmark and Greenland, predicted in late May that “2019 will be a big melt year for Greenland.”
Box pointed out that this year had unusually early season melt days in April, and the melt season was “happening about three weeks earlier than average, and earlier than the record-setting melt year of 2012.”
In addition to the early season melt, the snow cover is already lower than average in Western Greenland, and combining these factors “mean that 2019 is likely going to be a very big melt year, and even the potential to exceed the record melt year of 2012.”

What is causing the sudden melt?

A persistent weather pattern has been setting the stage for the current spike in melting, according to Mote.
“We’ve had a blocking ridge that has been anchored over East Greenland throughout much of the spring, which led to some melting activity in April — and that pattern has persisted.”
That high pressure ridge pulls up warm, humid air from the Central Atlantic into portions of Greenland which leads to warmer temperatures over the ice. The high pressure also prevents precipitation from forming and leads to clear, sunny skies.
Over the past week or two, that high pressure ridge got even stronger as another high pressure front moved in from the eastern U.S. (the one that caused the prolonged hot and dry period in the Southeast earlier this month). 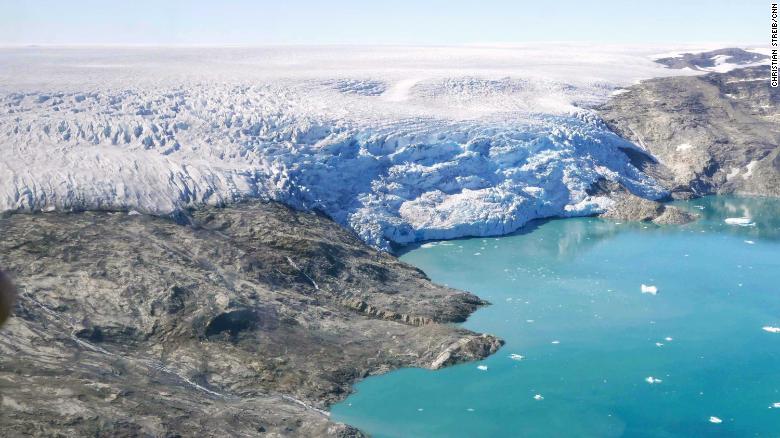 Melt periods like the current one are not unprecedented; Mote noted previous ones in 2012 as well as 2007 and 2010 (all major melt years). But he pointed out that until recently, they were unheard of.
“We’ve seen a sequence of these large melt seasons, starting in 2007, that would have been unprecedented earlier in the record,” and according to Mote “we didn’t see anything like this prior to the late 1990’s.”
If these extreme melt seasons are becoming the new normal, it could have significant ramifications around the globe, especially for sea level rise.
“Greenland has been an increasing contributor to global sea level rise over the past two decades,” Mote said, “and surface melting and runoff is a large portion of that.”
Source :
CNN
Tags: Greenlandhe University of Georgiathe National MallWashington DC