Hurricane Matthew is unleashing powerful winds and heavy rains on the southeastern U.S. state of Florida while the death toll continues to mount in storm-ravaged Haiti.

The National Weather Service said Matthew, which has weakened to a Category 3 storm, is “hugging the coast of central Florida” as it moves north-northwest packing maximum sustained winds of 195 kilometers per hour.

One of the areas bearing the brunt of the storm is Brevard County, Florida, where NASA’s Cape Canaveral is located. Brevard County Emergency Management Office spokesman David Walker told VOA mandatory evacuation orders were issued for 90,000 people living on barrier islands and in mobile homes but some people ignored them.

“Some of that can be attributed to hurricane complacency, which is a factor we have to contend with in Florida because we haven’t had a major incident remotely close to this hurricane-wise since 2004.”

Walker said one family called for help after the roof of their home “just flew off” and several other residents reported fires of an undetermined cause.

Matthew has already left hundreds dead in the Caribbean, including at least 300 in Haiti, where the death toll rose dramatically as areas cut off by the storm were reached by emergency response teams. It will take time to tally a definitive death toll because the damage in Haiti is so extensive.

Images distributed by journalists show entire landscapes of metal shanties with their roofs blown off, downed trees and mud from overflowing rivers spilling over onto the ground. 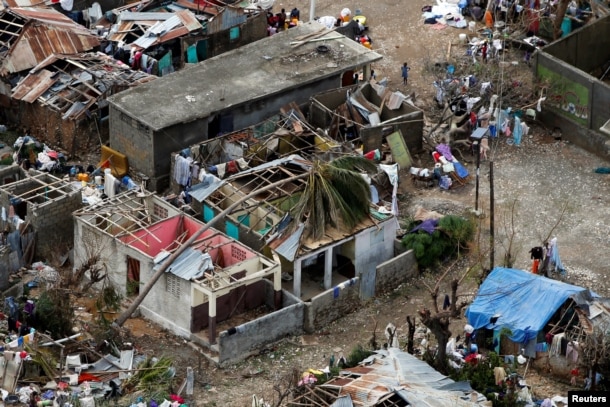 The Haitian town of Jeremie, with a population of 30,000, “is completely destroyed,” said Care Haiti director Jean-Michel Vigreux.

The United Nations said nearly 6 million Haitians have been affected by the storm with 350,000 people needing immediate aid.

The international Red Cross has announced an emergency appeal for $6.9 billion dollars in relief aid for Haiti, which has yet to fully recover from a killer earthquake that ravaged the country in 2010.

Along the eastern U.S. coast, more than 2 million people were ordered to evacuate their homes and head for safer areas. More than 300,000 people were left without power as the storm approached the Florida coast, and that number is expected to rise by the hour as the storm makes its way north.

Florida officials are calling anyone who decided not to evacuate “fools” and “idiots,” and cannot stress enough that this is an extremely dangerous storm with a potentially disastrous impact on the state.

Forecasters predict the storm will track north along the eastern coastlines of Georgia and South Carolina before heading out to sea, or possibly circling back around to hit Florida again.

The National Hurricane Center called Matthew the strongest hurricane seen in the region in decades. According to the NHC, the hurricane could create waves up to nearly 5 meters high.

Florida Governor Rick Scott has activated 3,500 National Guard troops. Experts say parts of the state could be uninhabitable for weeks after the storm.

Some Florida residents who have lived in the state 50 years or more and have lived through the worst Mother Nature can create fled their homes, telling reporters Matthew looks like a “bad one.”

Spokesman Raphael Lemaitre of the Federal Emergency Management Administration told VOA the agency has personnel and other resources ready to go.

“We have commodities on the ground already pre-located in several different staging areas throughout the potentially affected areas. Things like food, water, blankets, cots. We also have personnel on the ground there, rapid response teams,” Lemaitre said.

Forecasters say the greatest danger from the storm is not the wind, but the heavy storm surge that can be as high as nearly 5 meters above normal tides.

Will Boomer Women Decide the Election?